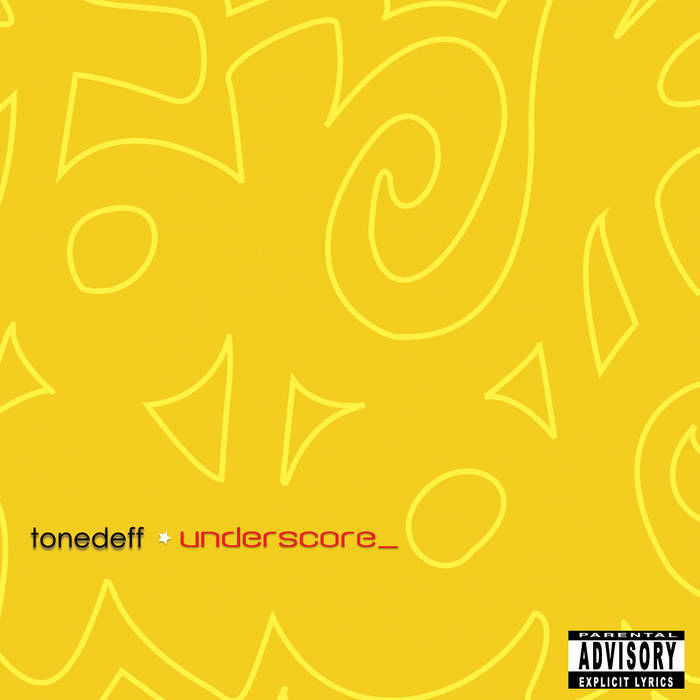 V1 – TONEDEFF
Hey, what’s a matter with the world today?/
There’s lots of hypocrites lurking, You can be sure to say/
See, plenty of times, I’ve been verbally burned or turned away/
By niggas that haven’t earned their say, so, in my defense, I’ve learned to play/
Cause I discerned decay in many crevices, heady rappers, biters,
writers and editors…So I take preventative measures/
It’s shame that this game b-b-became a bit of a pain/
I’m dealing with strain by gettin my name shit on by niggas that bitch and complain/
Consider the fame of underground rappers/
Who stand to waste their fan bases if soundscan can catch up, like Sales are bad luck/
Some cats only support you when they believe they’ve bought you/
But abort you the minute you blow the fuck up, or even start to/
No need argue, with these mean elitists/
This new breed of teens is conceited, thinking that they conceived the whole scene as you see it/
Like history prior to them was deleted/
Now, either you’re a conformist or an extremist/
My grievances are not with warrant because I’ve seen this… shitty element shine through/
By cynical individuals carrying rifles/
Don’t be original, don’t even try to/
You’ll always sound like somebody else, till somebody else sounds like you/
Be mindful of the powers that scheme/
I’m seeing these dudes that never paid dues with interviews and 2 page spreads in glossy magazines/
And I’ve had it with these fraudulent skeptics/
The type to say they wrecked shit, when the whole audience was on their guest list.

V1 – DEACON THE VILLAIN
Don’t you hate people without cars, that critique how you’re driving?/
What about them backseat rhymers, doggin’ your one-liners?/
Hip-Hop-ocrites, they ain’t droppin shit, so they smell yours/
And tell you how bad it stinks! Claiming you fell short/
Of their goal. It’s like you’re at a stage show/
They ain’t throwing tomatoes, but full bottles of Prego/
Like not seeking their non-seasoned advice would lead to your detriment/
While they’re sounding like P. Diddy with a speech impediment/
Knockin your better shit! (Y’all couldn’t have heard it right!)
Usually, they are suburbanites that are living the urban life/
Acting like your goal should be to be underground for life/
(Aight, then pay our bills, bitch, and turn on our lights!)
These motherfuckas act like there’s a set of rules to follow/
Well, check this…for you I got a set of jewels to swallow/
Cause half the cats you praise, you only like because he’s cool with your other favorite rapper/
You only like him because he used to be Eminem’s back-up/
Took a picture, had it posterized and found a wall to tack up/
But when Eminem blew up, you threw up/
Dissed him, and became the next underground sensation’s new slut/
It’s all sad. To you, songs with sung hooks, they’re all bad/
But throw Anticon’s wackest rapper on it, and you’re all glad/
This madness and inconsistency dulls my shine/
These bitches would try to discredit VISA if it rhymed/
(Now chew on that line).

V2A – TONEDEFF
What do you do if you’re a dick, nobody likes you, and you never get light?
You start your own hip-hop website!
Now you’re a big fish in a small pond, controlling all the facets/
Your opinions disappear in the instant your browser crashes/
You underground babies cry the most, like you’re starting to teethe/
He’s fifteen with an opinion – But me? I’m an artist with beef/
“Dude, Tonedeff is all flow, he only talks fast”/
Oh yeah? Well, here’s a SLOW FUCK YOU for you’re stalled ass”

V2B – DEACON THE VILLAIN
Well, what do you do when your careers dying, nearly with its breath gone/
You start whining, complaining, claiming you’re getting slept on/
In the lab mixing elements for your so-called ‘best song’/
Yelling, “I got the next bullet-single!” but Billboard is wearing Teflon/
Cooking up food for thought, but when your meal drops/
And listeners don’t like your flavor, you pout that, “Y’all don’t know real hip-hop!”
Eat a dick, doc. Your fame clock must be passed its tick-tock/
Now, punching soda cans is the only way you’ll hit-pop.

The Hammer and The Relentless from the Boston band Malleus stop by for a chat.