from Happy F​*​ck You Songs by Extended Famm 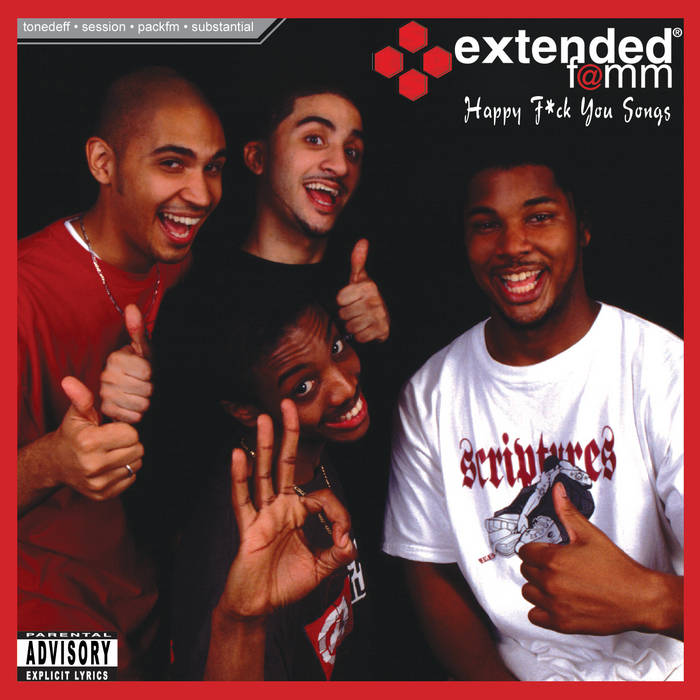 Tonedeff
F-F-First I sprinkle the—awww, fuck it, I’m reluctant/
to Spit another cameo verse, Cause, ain’t I said enough shit?/
Instead I’d rather stuff this, roster the fuck up with/
Lots of assumptions and roughly half of the rapping public/
I’ll handle production, Y’all make sure your verse catches the drum kick/
The odds of getting off are decent with 80 niggas and 1 chick/
Shit, I’ll even put my momma on it… (MOM: “Yo, Bust it..”)
I’d tell ya girl, but she’d get confused if I told her to come spit/

Deacon The Villain
yooooooooooo it’s deacon, i’m only on this shit cause I was asked//
drove from kentucky, so who the fuck is paying for my gas//
tone harassed me “heeeeey, it’s only 8 bars/
do it for QN5 guy, cause we’re that company that makes stars//
man, i could’ve been at home on my playstation//
can you believe for this shit that I used my vacation//
but O-NO! efamm needs me//
to spit a fuckin 20 second verse on their EP/

Mecca
Well, deac at least you knew you was getting suped up/
Why didn’t you tell me Tonedeff was such a ruthless producer/
I ain’t come in this bitch with loose lips/
I came here on some cool shit, Packed for the beach, expecting a crew trip/
But Tone is like, You spit, come on, bro, this really needs your flow/
Do it or your album’s out the door, Yo/
A fast one and I can’t pull it faster/
Aight you scheming bastard… that’s 8… now can I have my master?

Kno
Yo, I hate posse cuts, this isn’t challenging/
I’d rather collab with my other 8 personalities/
Think you can fuck with me?/
Thats automatically suspect like seeing R Kelly at Chuck E Cheese/
K-N-O the venomous gringo with intricate lingo/
witcha gramma playin bingo/
Blah blah blah punchline/
Why am I trying? Tonedeff’s on this track… I’m just gonna get shined!

iCONtheMicKing
They wanna do the hook b4 and after me i said it’s blasphemy/
it’s just none of them want their rhyme compared to this masterpiece/
But really though, I don’t wanna flow with you jerks/
Talking all this, I’m gonna kill it, but won’t show me your verse/
I’m getting my outshine on, y’all want to syphon rays/
Writing they verses, thinking…”Hmmmm, what would iCON say”/
You only getting 8, buy my shit if you wanting more/
I had to rewrite twice, I better be paid for 24.

GMS
Yo, how many cats on this track? Man, that’s wack/
Should’ve been me, Tone, Pack and that girl in the back/
I hate these long ass underground tapes/
You gotta wait, wait, wait, and then you only spit 8/
Gimme a break! What a waste of time!/
Here’s a couple of freetyle lines so I don’t have to waste a rhyme/
I’m not getting paid for this bitch?/
This your basic everyday flow, don’t expect no amazing shit.

Kameel-Yen
Now since they said i only got eight i aint no time /
this song is helpin my career as much as puff did shine/
and they lucky the beat’s hot otherwise what’d be the use/
of me sweatin my ass off in this little sound booth/
what am i the token chick with these dicks in a sword fight/
i don’t even know half these cats/ is this a song or an open mic/
you wrong if you think i’ll leave with no check in hand/
and if i don’t i’ll file a law suit (FUCK E-FAM !!!)

PackFM
Word? Well FUCK YOU TOO! I’ll show you how we do this properly /
We dont need a posse cut (why?) Efamm is a posse /
Dont need the credibility (why?) ‘Cause nobody can doubt mine /
Let’s do We Are the World, thats more heads for me to outshine /
Tone was like “Come on this is exessively long” /
Like after hearing my verse you care about the rest of the song/
(CD skipping forward) Is all you hear til you get to my part /
‘Cause my 8 bars alone make this a standout by far!

Elite
Fuck a posse cut, I don’t know half of these people/
We shouldn’t’ even make this like movies after the sequel/
Oh man… what a splendid plan/
It’s extended famm featuring it’s extended famm/
Let’s just make sure there’s no hook/ Or at least a bad one… like…
Ahh fuck it, I thought I had one/
The obligatory setup line!
You were expecting a punchline here… weren’t you!

Poison Pen
This is the song that never ends/
eF@mm, Poison Pen & a bunch of ballchinians/
And it goes on & on my friend/
I Just came to the lab for a beat-tape/
I had to hit the track off with something/
My flow glows…I traded in my tonsils for tungsten/
Ain’t no problem spittin on this shit/
Just try to get us all together…just to perform this shit.

Substantial
Now you goddamn well I barely show up to shows /
What made you think I want to be with yall kicking flows /
Splitting doe like umpteenth ways with these bozos /
Would’ve said a number but there is always no shows /
Probably be the one they predict to go solo /
And when I blow yo these same cats with no doe /
Who once were dick riders are now haters so check it /
They’re the reason why there won’t be posses cuts on my record!

Squijee
Ayo, it’s squijee, you know I’m always up in the mix/
Did you think that I wasn’t gonna spit 8 bars up in this bitch!?
Fuck y’all motherfuckers, I keep it street, B/
Squijee… I got the biggest dick in my speices/
So, what I’m 2 feet tall and look like a raccoon/
That’s tall enough to reach your girls pussy and ass too/
I’m gully son… I’m done with the subject/
Cause I just hit 8 bars, and I still ain’t fuckin’ drunk yet/